This illustrated poem below is my expression of Bulls and Bull Riders: 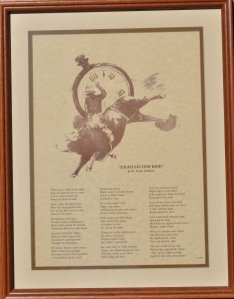 This is available in  an 11″ x 15″ Parchment, unframed, unmatted form for $25.00 (U.S.), plus $10 for shipping and handling .  This piece has been professionally illustrated. If you would like  to purchase this item, please send me a check at: PO Box 745865, Arvada, CO 80003. Your copy will be shipped flat (as rolled copies are not done anymore) as soon as is practicable.

Following is the wording of this piece:

There was a rope in his hand

Since he learned how to walk.

A slow drawl rolled out

When he chose to talk.

Were his background roots.

Son of the West from his hat

Down to his boots.

Toward a large holding pen;

Waiting for him to try once again.

He’d been thrown many times

With a bone-jarring thud.

As he hitched up his duds.

Suffered much pain and sweat,

Were part of his game,

As natural to him

As saying his name.

He took a last pull,

He must ride for eight seconds

Atop a two-thousand-pound fury;

Referees would score them,

Both judge and jury.

If he could just make the beast

Succumb to his will.

Every bone in his wiry body

Had been broken once or twice;

A ride without injury

Would surely be nice.

If he could hold onto his grip,

Shucks what a feat!

When his number was called,

The fear he would hide.

He tightened his spurs

For a rip snortin’ ride.

The last words on his lips

Before they opened his chute,

“Stay up for eight seconds,

And I’ll buy some new boots!”