Born of the people,
Learning to live off the land.
As a boy, he learned a warrior’s ways
And grew to be a man.

Strong Bow hunted Tatanka, the buffalo,
With both bow and lance.
He guided his horse among the headlong rush,
Killing meat to feed the people when he got a chance.

He had wooed and won a pretty maiden’s hand,
Who became his wife.
They lived and loved while moving freely on the land,
Following a nomad’s life.

He danced with fellow warriors,
Circling the fire around.
War drums beat the rhythm,
And many moccasined feet beat tattoos on the ground.

That was when he was young and powerful,
A mighty warrior to behold.
He was fast and furious back then, many moons ago.
Now he was gray and old.

Strong Bow sat on his aging war horse atop a hill.
His shoulders slumped forward with his head hung down.
Cold winds blew around him,
Making the only sound.

The old warrior’s face smiled lamely.
It was a good day to die,
And soon his spirit would depart,
Taking wings to fly.

Cold wind knifed through his buckskins
Into his old body both weak and frail.
Strong Bow closed his eyes and softly sang his death song,
Having reached the end of his trail. 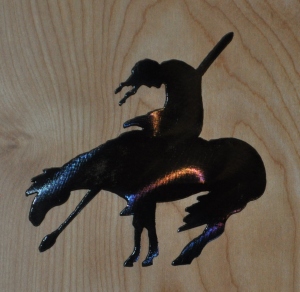 (Note: The above poem is a result of my thoughts that were evoked by this artwork.)